Othello rehearsals have begun, and we’re so excited to have guest artist Dennis Henry on board to direct. Read on to get to know him, and then go ahead and book your tickets for the show.

1. What made you want to work with STS?

I have worked extensively with Rick Blunt, the actor playing Iago. He had worked at Sweet Tea before and said, “I had a great time.” That was all the recommendation I needed. Also, I know that Jeremy Fiebig had come from the Mary Baldwin program and many of the philosophies of Sweet Tea are similar to that of the American Shakespeare Center. I love working on shows that have  lights on the audience and that respect Shakespeare’s text.

2. Why did you want to direct Othello?

I have studied Othello for years, and I often have my Intro to Theatre students read the play, but for some reason I had never worked on it before as an actor or director. The story is brilliant. It is so fast-paced, and the complex psychologies of both Iago and Othello are exciting to delve into.

3. How is this play relevant today?

Dennis: Othello is a play about manipulation. It is a play about one’s public persona vs. one’s actual character. It is about revenge. It is about jealousy. It’s about love. It’s about hate. This is the human condition. What do we really know about our friends, our family, our heroes and our politicians? We only know what we see. We rely heavily on “ocular proof,” as Othello puts it. But what do we really know?

Plus, Shakespeare foretold on-line dating in this play when he had Brabantio say, “Strike on the tinder, ho!” [rimshot]

4. What is your favorite play you’ve directed, and why?

My favorite play I have directed to this point is Silence by Moira Buffini, which I directed at the University of Nebraska. It is about a Viking prince who learns on his wedding night that he is actually a princess. It is also about the apocalypse and has a hallucinogenic mushroom scene. What else do you need in a play?

5. What is the best play you’ve ever seen?

So many to choose from! In 1997 I saw A Doll’s House on Broadway starring Janet McTeer as Nora. Her performance was certainly the best live performance I’ve seen. Also, I was impressed how straightforward the direction was. It was a 100-year-old play that many feel the urge to “update.” This production just “did the play” and it was remarkable.

6. What show do you dream of directing?

This answer always changes based on what mood I’m in, because there is so much awesome stuff out there. Christopher Marlowe’s Doctor Faustus is up near the top of the list these days. It’s a great story and I love the macabre.I would wanna do it around Halloween time.

Emilia kills Iago, saves Desdemona with CPR, and they run away together.

8. What would Othello or Iago’s theme song be?

“Ghengis Khan” by Miike Snow works for both. “I get a little bit Ghengis Khan, I don’t want you to get it on, with nobody else but me.”

9. What are you most looking forward to about your time in NC?

Returning to the Fayetteville Waffle House where I was mocked by the waitress for ordering unsweetened tea while at the National HS Speech and Debate tournament in 1998. (“I don’t know how ya’ll can drink it like that.”) Ironically, I am returning to work with Sweet Tea Shakespeare. I don’t think I’ll make that cultural faux pas again.

10. What kind of food do you like (so our fan group, the Sugars, can make local restaurant suggestions)?

Wings, Burgers, Pizza. Anything unhealthy that tastes good with beer. 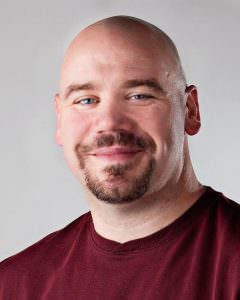 Though we’re still a couple of months away from sharing our summer shows with you, preparation is well underway. To help get you ready, we’re going to introduce you to some of the guest artists who’ll be joining us this summer. First up is Rick Blunt, who will play Iago in Othello.

1. What made you want to work with STS?
I was classmates with founder Jeremy Fiebig.  We both graduated with our MFAs from Mary Baldwin University with a degree in Shakespeare in Performance.  I was an Acting Emphasis at MBU; I think Jeremy was a Directing Emphasis.  The graduate work in Shakespeare at Mary Baldwin is unique in that it focuses on the how Shakespeare performed his plays, and specifically how he was able to include his audience in the text of his plays.  Furthermore, I co-directed Twelfth Night and did the fight choreography with Sweet Tea Shakespeare a while back, and in truth, the group of people I met were unforgettable. There is no substitute for passion, and the vibes around these people is second to none.  I describe founder Jeremy Fiebig as a “doer.”  Simply put, the guy gets things done.  When I arrived in Fayetteville and met the people of Sweet Tea, I knew I wanted to work here again.
2. Why did you want to act in Othello?
Iago is one of the greatest roles in Shakespeare.  And Jeremy put together a dynamite cast, and with a director that I love.  How could I resist?  Plus, Othello is a beautifully horrible play.  Along with Othello and Iago, I particularly like the character of Desdemona and her journey throughout the play.  And I love the scene between Desdemona and Emilia near the end of this play.  “The world is a huge thing,” says Emilia.  I don’t want to give anything away, but I hope you enjoy it as much as I do.
3. How is this play relevant today?
This play is relevant for many reasons:  most importantly, human emotions haven’t changed in 400 years.  Maybe the order we say them in has changed a bit, but nothing about what these characters experience is foreign to a human being today.
For example:
Jealousy:  Othello is jealous, but so is Iago.
Anger: There is lots of anger in this play that centers around characters not getting what they want or struggling to get what they want.
Hurt:  Hurt that your wife cheated on you is one thing, but poor Roderigo is hurt because he loves Desdemona and she does not love him, and her father hates him.
Abuse:  Desdemona is hit in public in this play.  Roderigo is used for his money and then… you’ll see.
Parental Issues:  Desdemona elopes with a man her father does not approve of.
Otherness:  Othello, along with being a Moor, has no idea about the culture that surrounds him in this play, so along with race, it’s about otherness, which is relevant to the idea of the marginalized persons and communities in our society today.
4. What is your favorite role you’ve played, and why?
My favorite role I’ve played is Falstaff in Henry 4 part 1.  Falstaff reminds me of my father.  Falstaff, like my father, was one of the most entertaining men in the world.
I also want to give a shout out to A Midsummer Night’s Dream.  I was born to play Nick Bottom.  And I love that play.  It is a perfect play.  There is no better way to spend your summer than playing any role in A Midsummer Night’s Dream.
5. What is the best play you’ve ever seen?
This is my answer, though I’m not sure it answers your question.  My friend, Dr. James Keegan, was playing Falstaff in Henry 4 part 2.  That is a play about aging and death.  James’ mother fell ill and was close to death.  In fact, she died the next day, luckily, it was the next day and James was by her side when she passed.  James playing Falstaff in that play, about aging and death, and his knowledge of his mother’s declining health was one of the most miraculous and extraordinary performances that I’ve ever witnessed.
6. What role do you dream of playing?
Rooster in Jerusalem. For me to play that role, I would have to approach a character in a way that I never had to before.  I don’t consider myself a transformative actor; I try to find as much as myself in a role as possible, but to play Rooster, I’d have to change that approach.
7. Briefly devise an alternate ending for Othello.
In Antony and Cleopatra, Enobarbus dies of a broken heart.  It would be cool to see Othello die of a broken heart at the end of this play.
8. What would Iago’s theme song be?
For Iago, “Let the Bodies Hit the Floor.”
That’s more of a punchline, because I don’t think Iago wants anyone dead in this play:  he wants them ruined and alive to feel it.  I don’t know a song about that.
9. What are you most looking forward to about your time in NC?
Seeing lizards.
And perhaps, this time, I’ll get to do some fishing.
Reuniting with the folks of Sweet Tea, and being in a play again with my friends Jake Daly, Justine Mackey, and my brother Dennis Henry.
10. What kind of food do you like?

BBQ.  All day and all night.