Let’s talk about Eve. We’re fairly familiar with her story, right? She was Adam’s beloved partner in the Garden of Eden, the Paradise that God made expressly for his most treasured creation, humanity. You know, Adam and Eve. That Eve.

Before joining the cast of Paradise Lost, I felt like I had a decent grasp of the Creation story and what Eve contributed. She was the first woman, Adam’s wife, the mother of humankind. I did some background reading on John Milton’s interpretation of Eve in Paradise Lost, and he seemed to depict her as kind of ethereal yet earthy, naive yet clever. I could certainly visualize that. As I continued reading, however, I came across some less flattering characteristics that Milton seemed to give his Eve: vain, impulsive, cunning. Was that true? In rehearsals, I looked for moments when Eve’s personality flaws began to show, and I started to see her story in an entirely new light. Sure, it wasn’t difficult for the Serpent to charm Eve into tasting the forbidden fruit, but to me, it seemed that Eve got a lot of undeserved flack and an unnecessary amount of blame for the fall of humanity. Yes, she played a crucial part in the whole ordeal. But can we blame her?
Eve wasn’t infallible, and she certainly wasn’t blameless. But she had a streak of independence and a desire for experience that, I believe, many of us can understand. She had a yearning to know deeper feeling and deeper love. She was unafraid of death; in fact, she was willing to die if it meant she could experience life more fully. My understanding of Eve has grown from that of distant respect for a mother-figure to that of admiration for the ideals that made her–in short–beautifully complex and absolutely human. And in a sense, that feels so wonderfully comforting. I suppose Eve should be held accountable for her poor decisions, as we all should; but I don’t think we can rightfully ignore the heroine in her. I’ve grown to love all aspects of Eve’s character: flaws and all. 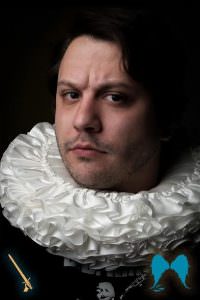 It has been fun getting to know the “First Man on Earth.”  While working on this role I realized that Adam, although a man, is in fact an unblemished child.  He knew no wrong, only that there was one forbiddance.  His Father basically left him two responsibilities: praise (to his pops) and staying away from the Tree of Knowledge.  Simple, right?

Then, God goes and throws a wrench into his own plans.  This is when Adam meets Eve. It’s crazy: God knew this wouldn’t work but thought, “Ah, here you go boy…good luck.”  Adam praised his Father even more for caring enough to give him a partner to go through the maze of life with.  This is when the second Love was established, the first being the love and admiration for his Father.

Adam had to make a choice.  He risked it all and extended himself over the boundary, that his Father had set.  He chose the latter of the Loves.  In his honesty he professed that he chose Eve, because in choosing one of his Dad’s creations, he was still praising him. 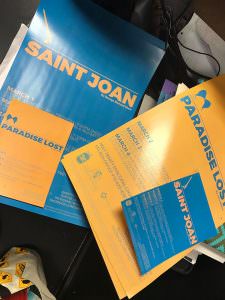 By Ruth Nelson, Master of Dramaturgy

God the Father. The omnipotent, omnipresent, omniscient divine creator of all things. It’s a fairly daunting concept to grasp, even theoretically; how, then, does one go about turning that concept into a character to be presented believably onstage? This is the task set to me by Jessica Osnoe, the adapter and director of Sweet Tea Shakespeare’s Paradise Lost, and I am grateful for the challenge—not because I have some sort of fetish for difficult challenges, but because this is the Story of stories, and it is an honor and privilege to share in this inimitable telling of it.

When most people think of “God,” I imagine some form of these two thoughts spring instantly to mind: “Man, he’s mighty” and “Man, he’s mad.” Wrath and power; terrible and everlasting judgment; impossible standards of perfection; these are the lenses through which most of us see the divine. It would be easy to play to these stereotypes, particularly in the context of Paradise Lost. The story begins with the fall of Satan and his angels from heaven and ends with Adam and Eve being driven out of Eden because of their sin; could God have any more reason to be profoundly peeved? However, I knew immediately that this was not the route I wanted to take. It is not the best route, nor is it true.

We have a saying at Sweet Tea Shakespeare: “Love is the strongest choice.” Looking at this story through the lens of love, we see that Adam and Eve—though they lose Eden—are not the ones who lose the most. Satan loses heaven, but he is not the one with most cause to mourn. This is a story about a father’s –THE Father’s—loss. He grieves over Satan and the demons as they fall willfully from heaven. He mourns over Adam and Eve as they freely choose the offered temptation over his present and promised provision. He laments over his beautiful creation, which falls under a curse because of mankind’s transgression. Every time we see God the Father, he is in mourning. There is anger, yes—but it is the anger that flows from a broken heart. There is power, certainly—but it is evidenced primarily in the increased capacity of such a heart to love, create, suffer, forgive, and continue loving.

This love and the pain that necessarily accompanies it have guided me as an actor through this unique process. And it is the victory of this love that allows the show to close with a spark of hope, lighting the way from paradise into the waiting everyday world.

I hope to see you there.