Here at Sweet Tea Shakespeare, we often say that love is the strongest choice. However, love doesn’t always lead us to make the best decisions (just ask Romeo and Juliet).  In our current production, As You Like Lit, characters go to great (and hilarious) lengths to make an impression on the objects of their desire. In the words of the jester Touchstone, “We that are true lovers run into strange capers.” We’ve been asking our audience members to submit their own stories of the best, worst, or craziest things they’ve ever done for love, and wow, have we gotten some good ones.  A representative sampling:

“At age 12, at a birthday party, sang Hendrix’s ‘Foxy Lady’ to first girlfriend in front of crowd. DID NOT GO WELL.”

“Got a tattoo that I regretted.”

“I wrote a one-woman play confessing my love and acting out our whole relationship from meeting to marriage, kids, and eventual death.”

“I performed feats of daring and strength on the elementary school playground to impress her, such as jumping from high playground objects.”

“I pretended to be someone I wasn’t: fake name, fake income, fake profession.”

Do you want to reveal your own tale of what you’ve done for love? Join us Thursday at Cape Fear Botanical Garden, Friday at Fainting Goat Brewing Company, or Sunday at Double Barley Brewing for the final weekend of As You Like Lit, where we are all fools for love.

We are lucky to have a guest writer this week: Hymen, the goddess of marriage, who makes a special appearance in our production of As You Like Lit. The play is bursting with characters who are plagued with love woes; can Hymen help them solve their problems? Read on to find out.

I never thought I’d write a letter like this, but here goes. I met a really cute wrestler, and I think I made a good impression on him. But just after our meet-cute, my jerk uncle threw me out of the kingdom. So now I’m wandering the Forest of Arden disguised as a boy, and of course, who do I run into? Yep, the hot wrestler. Do I blow my cover and confess my feelings, or do I keep on letting him think I’m a dude? It’s definitely getting weird.

Sometimes you don’t have to make a choice. Keep your cover and continue to flirt with him until you feel the time is right to reveal your true self. Trust me, he’s probably into it.

I have got a real problem. I ran into this cute guy in the woods, but he acts like he wants nothing to do with me. Crazy, right? I mean, I’m adorable. Making matters worse, one of my coworkers (we tend sheep together) is disgustingly in love with me, but I’m just not interested. How do I win over the one I like and get rid of the one I don’t?

Are you sure you’re as cute as you think you are? If the new guy doesn’t want you, there’s really nothing you can do about it. It might not hurt to put your feelings in a letter, but be prepared—it might not go your way.  And remember, the guy you want to dismiss has a huge advantage over the one you want to attract: he can stand to be around you.

I’m just a simple country girl, but I recently met a man from the city. He’s a little weird, but his courtly ways are so sophisticated. There’s just one thing: I’m embarrassed to admit it, but I don’t get his jokes, which makes me feel dumb. What should I do?

Just smile and nod. He probably doesn’t want you for your mind.

I met this girl; I like her; I’m pretty sure she likes me too. So I came up with what I thought was a foolproof way to win her over: I wrote poems and stuck them in trees. Genius, right? What girl doesn’t like a good poem? And trees? But now everyone is reading my poems and making fun of them. It’s really doing a number on the old self-esteem. How do I get my confidence back?

Plenty of girls like a good poem, but I’ve read yours—they’re atrocious. Wait, I’m supposed to be helping you with your self-esteem. Let me try again. Clearly poetry isn’t your bag, so to build your confidence, try something you’re good at. Ever thought about fighting a lion?

Thanks, Hymen, for helping out our smitten Ardenites. You, too, can seek the good goddess’s counsel at As You Like Lit!

Are you ready to have a drink in the Forest of Arden? In anticipation of the opening of As You Like Lit, the cast reveals what they think their characters would imbibe.

Audrey (Jennifer Czechowski): A nice rosé, like the pink one Boone’s Farm makes.

Join us at the Arts Council in Fayetteville, Sports USA on Ft. Bragg, Dirtbag Ales, Cape Fear Botanical Garden, Fainting Goat Brewing Company, or Double Barley Brewing to have your own drink while you watch the shenanigans ensue. 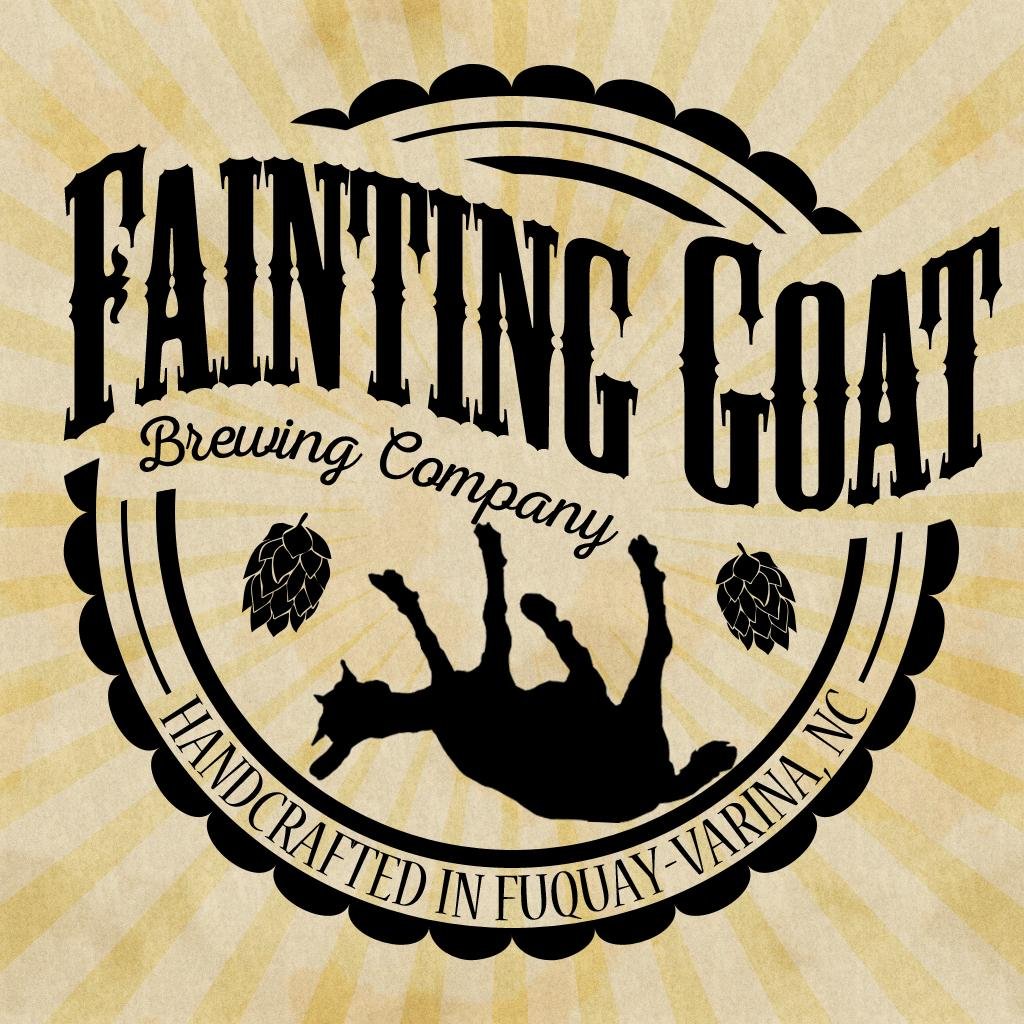 When we took Romeo and JuliLIT to Fainting Goat Brewery in Fuquay-Varina, we had such a great time that we had to go back. As You Like LIT will play at Fainting Goat on May 5, and we can’t wait. Owner and business manager Mary Ann Durborrow fills us in on what makes the place special.

1. What sets Fainting Goat apart from other breweries?

Great beers! We’re a small boutique intimate brewery with no wifi or TVs. People actually have to talk to each other.
2. What else would you recommend that people do, see, drink, or eat in Fuquay-Varina?
Take a nice stroll down Main Street stop in all the neat little shops, order in or bring in food from the restaurants we have in town to enjoy with our great beer.
3. Which beers do you recommend?
This is hard as they are all so good in their own way. Our What the Buck American Pale Ale just received an award from The Brewery Traveler as the best American Pale Ale for 2016!  Der Hoof Hefeweizen is a true German brewed Hefeweizen which is a favorite as well as our Butthead Brown Ale. When in season, Udder Brother Pecan Maple Porter, Not So Pale Chocolate Ale and Fluffernutter. Every month we have a special released called our Ballet, Bullets and Beer (named for the history of the building) releases, which have proven very tasty.
4. What made you decide to host another Lit performance?
Feedback from our patrons!  We like to bring something fun and unique to our brewery for locals to enjoy and experience.
5. What keeps people coming back to Fainting Goat?
Besides our brews, our friendly staff. We are all like family. We work together and hang out (when time allows) together. Any given weekend you can come in and find staff hanging out on their days off.
6. What is the history of Fainting Goat?

Fainting Goat was a dream of my business partner Tim’s. He came back from Iraq in 2009/2010 with a different perspective on life and decided to do two things he always wanted: buy a Harley and learn how to brew beer. In 2013 Tim called me with his idea and dream of opening a brewery. Tim and I met 11 or 12 years ago when his son and my daughter played ice hockey together. He wanted to brew with nothing to do with the business end of things, so this is where I came in. As far as the name, Tim has a condition called laughter induced syncope. When he gets into a real belly laugh, the air in his lungs is expelled, causing him to faint. While in the military (he took deferred retirement back in July to brew full time) during the last night of a two week training mission his unit was, on they were sitting around joking and laughing when Tim fainted and was nicknamed “Fainting Goat.”

We hope you’ll join us as Fainting Goat transforms into the Forest of Arden. Get tickets: https://sweetteashakespeare.com/event/as-you-like-lit/

Though Sweet Tea Shakespeare’s home is in Fayetteville (with frequent jaunts to Dirtbag Ales next door in Hope Mills), we’re excited to be taking Lit on the road.  On May 7, we’ll perform As You Like Lit at Double Barley Brewing in Smithfield.  So what is this place, and why should you go there? Double Barley’s own Cheryl Lane kindly answered some questions for us.

We specialize in big, bold beers.  We have a unique taproom with reclaimed wood and tin from a recycled barn.  We sell local art.  We have a small kitchen with fresh food, and there’s a beer garden. We have fun events!

The cool people, and we love fun events.

The beer and southern hospitality.  We like our regulars more than most of our own families.

Cheryl gave Larry a homebrew kit for his 40th birthday, and a brewery was born.  We opened in October 2013.  We are friend and family owned and operated.

Double Barley brewing sounds like a great place to have a beer or three and see an awesome show! We hope to see you in Smithfield on May 7.

By Marie Lowe, Associate Artistic Director, Master of Audience and Lit, and director of As You Like LIT

As the newest production in our LIT Series, As You Like LIT, approaches, several people have asked how we develop these shows. Here’s a quick how-to guide: