Sweet Tea Shakespeare’s Shipwreck Festival is a four-month celebration of storytelling that unites ten theatrical plays in which a shipwreck impacts the story’s characters, theme, or plot.

The festival opens with The Sea Voyage on April 10 (performed by Green Tea, Sweet Tea’s Youth Company) and includes the Sweet Tea Shakespeare Company performances of: Pan (April 17), Venice Preserv’d (April 24), Dido, Queen of Carthage (May 1), Pericles, Prince of Tyre (May 15), The School for Scandal (June 12), The Tempest (June 19), Twelfth Night (June 26), The Merchant of Venice (July 10), and Antony and Cleopatra (July 17).

Admission price is “pay what you will” starting at $10 per play. Special “All-Aboard Passports” are $50 and include all ten plays. Unless otherwise noted, all shows are virtual and begin at 7:30 pm EST. To purchase tickets: https://sweetteashakespeare.com/tickets/

The Show Goes On

The Show Must Go On … except of course when it doesn’t.

Every aspect of life has been affected by the coronavirus pandemic, and theatre is no different.

Claire Cochrane, professor of theatre studies at the University of Worcester, says: “The current situation is almost unprecedented. The only comparison is really the plague outbreaks in the 16th century and the early 17th century – and then the really big outbreak in 1665 to 1666. In each case, the public theatres were closed to protect the public from infection” from the plague.

These closures affected Shakespeare’s own life. Trevor R Griffiths, of the Society for Theatre Research, says: “In those enforced gaps Shakespeare was probably doing a lot of things we’re doing, sitting at home and reading. He couldn’t stage plays so he seems to have written some of his great poems during the closures in the early 1590s. He may well have been thinking: ‘That would be a good play for when we’re back in action.’”

In those days many actors and writers, including Shakespeare and the King’s Men, fled London to tour areas not affected by the plague in the countryside. Today, in our globally connected world, we go online! (The above was adapted from https://www.thestage.co.uk/long-reads/from-pandemics-to-puritans-when-theatre-shut-down-through-history-and-how-it-recovered.)

The other major closure of the 17th century was not due to disease. In 1642, the Puritan-led parliament ordered the indefinite closure of all London theatres, citing “times of humiliation” and “stage-plays representative of lascivious mirth and levity.” (See link to our Digital Restoration Series for more information.)

We at Sweet Tea Shakespeare think we could all use some levity. We believe in the magic of classical theater, especially during times of national suffering and healing. Plays dazzle and delight us, while reminding us of our common humanity: our heroic triumphs and, yes, even sometimes our equally heroic defeats.

Sweet Tea Shakespeare offers a virtual treat of online “shipwreck” performances as we begin to emerge from the shipwreck which was 2020. Welcome to the wreckage. Welcome to the party! The Show Goes On …

Tickets: Purchase tickets at https://www.sweetteashakespeare.com/tickets/. Season tickets may be used for you and any guests you wish to include; however, season tickets may not be transferred to others without first contacting the Box Office: (910) 420-4383.

Attendance and Refund Policy: Our outdoor performances are weather dependent: cool or hot, humid or dry, depending. We sometimes provide regular folding chairs, allow people to bring their own chairs, and always invite audience members to make adjustments for their own comfort, for example to adjust sight lines or out of kindness to others. On outdoor performance nights where we move indoors due to rain, you can return for free to a performance of the same production at a later time by registering in advance with our box office. Unfortunately we are not able to offer refunds for purchased tickets.

The Sea Voyage by John Fletcher and Philip Massinger (April 10)

Castaways on a mysterious island, Sebastian and his nephew, Nicusa, are hungry and desperate to get off the island and return home to their families when shipwrecked Captain Albert and his crew of pirates come ashore. As Sebastian and Nicusa plot to escape in the pirates’ boat, Captain Albert and his men discover a tribe of female Amazons with their own ideas about what it takes to be a warrior. Swords clash, romance kindles, and hijinks ensue as the island’s inhabitants face off in a final showdown that will forever change their lives. Written in classical verse by two contemporaries of William Shakespeare, The Sea Voyage is a swashbuckling comedy, fun for the whole family. 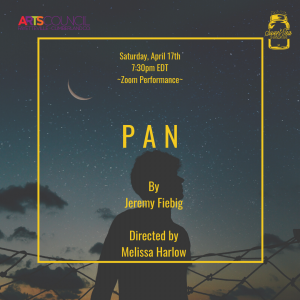 Peter, the impish yet innocent boy who refuses to grow up — and who can fly! — lands in a suburban home looking for his shadow. Once inside, he befriends the children: Wendy, John, and Michael. With help from some magic fairy dust, Peter teaches them to fly before whisking them off for adventures on the island of Neverland: a land inhabited by mermaids, fairies and, of course, pirates, and the despicable Captain Hook. The enduring story of Peter Pan, or The Boy Who Wouldn’t Grow Up, by JM Barrie premiered in 1904 at the Duke of York’s Theatre in London. In 1911, Barrie adapted and expanded the play into a novel published as Peter and Wendy. Fiebig’s version of this classic tale is a delightful adventure for the whole family! 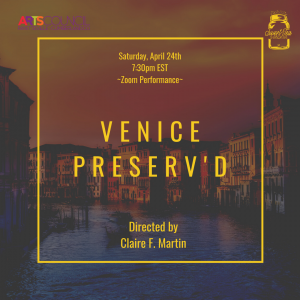 Noir meets politics in this thrilling Restoration tragedy, first staged in 1682. When a corrupt Senate rules with an iron fist, activists in the “floating city” of Venice take to the streets and canals in protest. In the middle of this political upheaval, a love affair between the young reformer Jaffeir and the daughter of a Senator explodes into scandal. When Jaffeir’s friends invite him to join an underground resistance aimed at destroying the Senate once and for all, Jaffeir soon learns the conspirators may be as corrupt as those in power. The stage is set for a different kind of shipwreck, a destructive revolution that will turn everyone’s world upside down. VENICE PRESERV’D is the sixth production in the Digital Restoration Series.

Dido, Queen of Carthage by Christopher Marlowe (May 1) 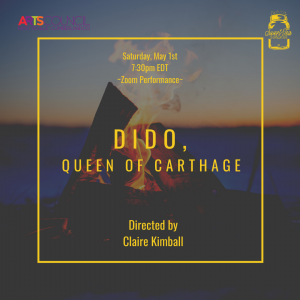 Aeneas, prince of the lost city of Troy and son of the goddess Venus, is aboard a ship bound for the North African coast when he becomes lost in a storm. The god Jupiter steps in and saves him by calming the seas, allowing Aeneas to land safely. At first, all seems well. Once on land, Aeneas meets Dido, the Queen of Carthage, and he tells her of the destruction of Troy and the purpose for his trip and destiny: to found a new Troy in Italy. Dido supports Aeneas’s goal and agrees to supply his ships. But then Cupid arrives and casts a spell to make Dido fall in love with Aeneas. More storms (literally and figuratively) ensue as now Dido, in love with Aeneas, desperately tries to keep Aeneas from leaving.

Pericles, Prince of Tyre by William Shakespeare (May 15) 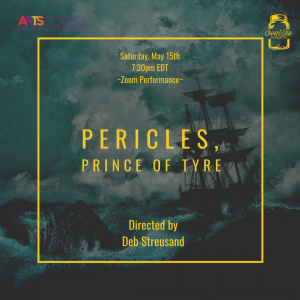 One of Shakespeare’s most adventure-filled plays! Travel along with Prince Pericles on his sailing journey as he flees Antioch in an attempt to save himself from the vengeful and murderous King Antiochus. Chased by King Antiochus’s assassins, while facing rough seas and violent storms, Prince Pericles tries to hide by traveling all around the ancient Greek world until he is shipwrecked in Pentapolis, a fair city with an even fairer King’s daughter: Thaisa (pronounced Ty-eesa). Pericles immediately falls in love and marries Thaisa, but it is not happily-ever-after as many more trials and storms await the couple. Pericles, Prince of Tyre is a love story wrapped in thrilling adventure, complete with pirates, kidnaping, narrow escapes, and the constant threat of peril, as Pericles and Thaisa seek the safety only a stable family, home, and land can provide.

The School for Scandal by Richard Brinsley Sheridan (June 12) 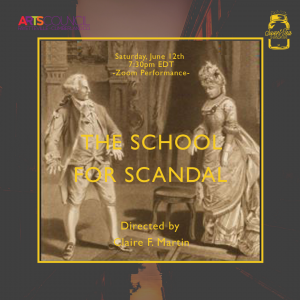 Love, money, status, family: anything can become a scandal when it’s talked about too much. No one knows this better than Lady Sneerwell, reigning queen of London society. In this delightful satire of the upper crust, Sneerwell and her posse of “scandalmongers” meddle and scheme while two brothers battle for the affection and fortune of a beautiful heiress named Maria. If only Maria’s young stepmother weren’t so appealing… Richard Brinsley Sheridan’s outrageous 18th-century comedy invites us into a world teetering on the edge of revolution…and a nuclear family headed for its own metaphorical shipwreck. THE SCHOOL FOR SCANDAL is the seventh and final production in the Digital Restoration Series.

The Tempest by William Shakespeare (June 19) 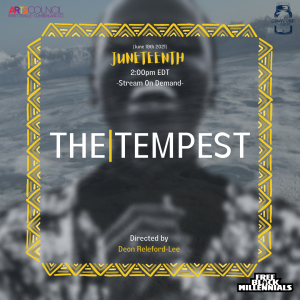 Miranda watches from the shore of an island where she lives with her father, Prospero, as a ship is wrecked in a terrible storm. Twelve years earlier, Miranda and her father were also shipwrecked on the island. Miranda is afraid for the voyagers. But Prospero assures her they are safe—the storm and the wreck were no accident. Created by Prospero’s spirit-servant Ariel, under the magic art of Prospero, the wrecked boat carries Alonso King of Naples and his son Ferdinand, along with Antonio (Miranda’s uncle and Prospero’s treacherous brother) and other nobles, many of whom were responsible for Miranda and Prospero’s being put out to sea all those years ago. Prospero now holds power over them, and he plans to exact revenge.

Shakespeare on Juneteenth: Though President Lincoln’s Emancipation Proclamation (January 1, 1863) legally freed slaves in the Confederate States, word didn’t reach parts of the deep south until 2 years later. Tens of thousands of enslaved people were still suffering from the inhumane grasp of slavery in Texas until June 19, 1865 when Major Gen. Gordan Granger, backed by the Union army, rode into Texas and announced that slaves were now free. Marking the “end” of slavery in our country, Juneteenth (a combination of June and the number nineteen) is a celebration of Black independence in the United States. Our production of The Tempest, being released on Juneteenth and performed by a predominately Black/BIPOC cast, is a love letter to the Black community. Black voices personifying this Shakespearean text leads us to have conversations of freedom, trauma, gender roles, love, betrayal, colonization, utopianism and so much more. On behalf of Deon Releford-Lee and the Free Black Millennials team: we love you, we are proud of you, we see you, WE ARE YOU! 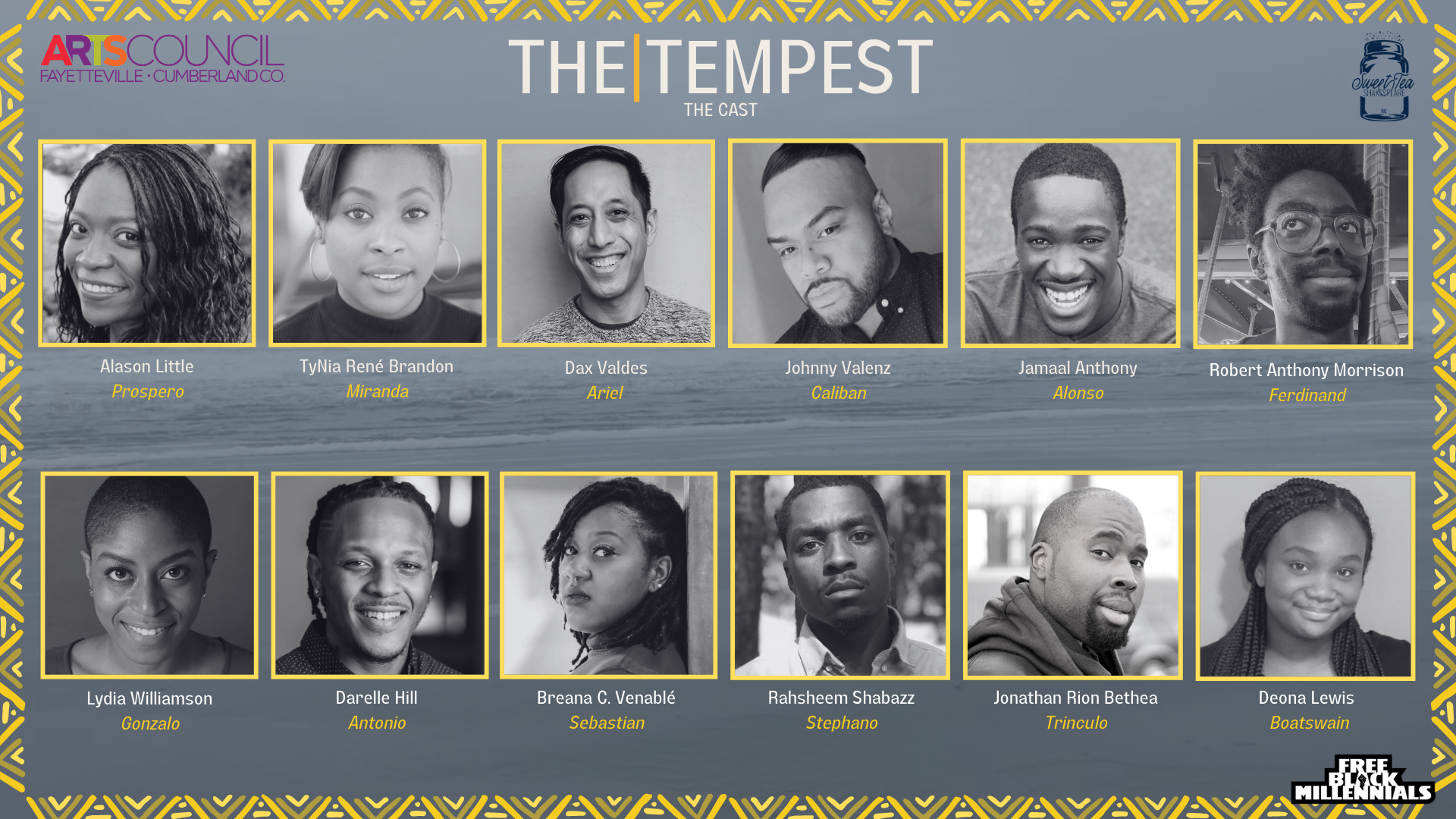 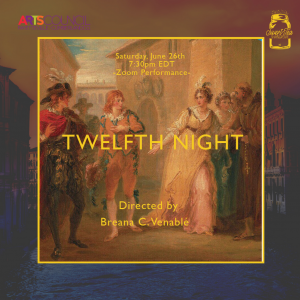 Twelfth Night is a fast-paced romantic comedy with several interwoven plots of romance, mistaken identities and practical jokes. Separated from her twin brother Sebastian in a shipwreck, Viola disguises herself as a boy and becomes a servant to the Duke Orsino. He sends her to woo the Countess Olivia on his behalf, but the Countess falls in love with the disguised Viola instead.  Between Olivia’s drunk uncle and more confusion when Viola’s twin brother turns up, more chaos and comedy ensue.

The Merchant of Venice by William Shakespeare (July 10) 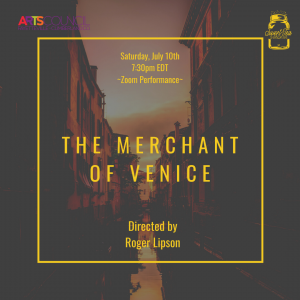 A fragile house of cards is built as Bassanio borrows money from his friend, Antonio, the Merchant of Venice, to (of course) woo a wealthy and beautiful young woman. Antonio’s own money is tied up in business ventures that depend on the safe return of his ships from sea, so he borrows the money from Shylock, a Jewish moneylender Antonio has previously offended, who lends the money against a bond. Failure to repay the loan on the agreed date will entitle Shylock to a pound of Antonio’s flesh. What could go wrong? Everything, of course! 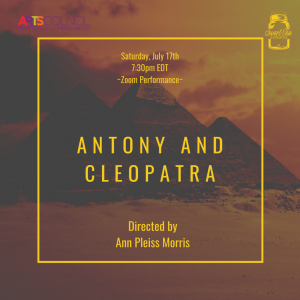 Shakespeare’s tragedy of love and duty is one of Shakespeare’s great historical stories. Antony, who rules the Roman Empire as a triumvirate, is captivated by Cleopatra, Queen of Egypt. But the Romans find his behavior ‘un-Roman.’ Increased political turmoil and plots of murder ensue. Antony’s love resides in Egypt, but his duty is back in Rome. As Antony struggles with his love and his duty, the fate of two kingdoms lie in the balance.