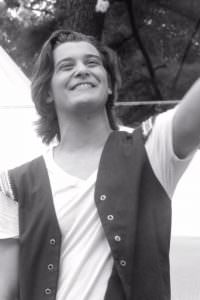 Every actor has something that they know they are good at and something at which they know they are bad. For example: I know that I can yell, and usually yell pretty convincingly. I can turn anger and other evil feelings on at the drop of a hat. My struggle? I know that I can yell, and sometimes do it convincingly. The thing I consider my greatest strength also happens to be what I consider my greatest weakness, and here’s the thing with Posthumus: he is like an emotional grenade. He explodes at the drop of a hat with very little reason, ration, or thought behind it. Being convinced that his wife is unfaithful takes exactly one scene, and from that scene he launches into a tirade against all women.

Here’s the trap: it is easy to yell, but hard to yell with intention. This is not just a rage; he is not only angry and sad and in pain. He’s also in love. When someone breaks your heart you don’t stop loving them in that moment—maybe you never stop loving them. Every moment of every sentence of every scene has a layer of emotion and intention, and then there’s another layer, and then another. You keep delving into that rabbit hole until you have reached the ultimate intention or emotion. For Posthumus, that’s love. That is where I struggle: finding that beautiful, joyful, indescribable emotion in the midst of all this pain and anguish. I fight to find that every time I perform this monologue. Without it, this monologue has no teeth—there’s no reason for the audience to care about a guy who is simply angry and yelling about a woman who (spoilers) didn’t actually cheat on him. Here at Sweet Tea Shakes there’s a saying that gets passed on a lot, and which I’ve heard increasingly in this production, that “love is the strongest choice,” and I can find no better way to describe my struggle, and Posthumus’s, in Cymbeline.