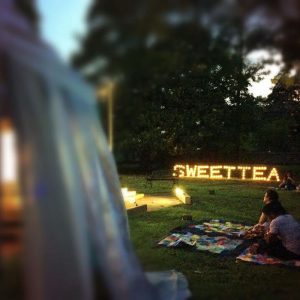 Jen:  This has been a rich, varied season for STS. How do you plan a season of theatre? What decisions and considerations must be made?

Jeremy:  Season selection is really the heart of what we do. What stories do we want to tell and how?

In our first two seasons, we paired a Shakespeare play with a non-Shakespeare play. In 2012, that non-Shakespeare was Oscar Wilde’s The Importance of Being Earnest, which is perhaps my favorite comedy. I think it’s a perfect play and I cannot wait to do it again. In 2013, the non-Shakespeare was Anton Chekhov’s The Seagull, which had been on my list since I saw an amazing production by the Royal Shakespeare Company several years ago. At the time, a lot of folks asked why we called ourselves Sweet Tea Shakespeare if we did things that weren’t Shakespeare. The answer, for me, was that of course everything after Shakespeare is somehow Shakespeare. In literary and performance criticism, we talk about this concept of “afterlives”–how plays live on after their first productions. How they break down, how they influence, how they pollinate things that come after them. So in Earnest, we were interested in seeing the lively banter of the language and the love stories and mistaken identities paired with some of those same elements in 2012’s production of Much Ado About Nothing. In The Seagull, three of the central characters in the story are actors, some even referencing Shakespeare. And there is definitely an afterlife of Romeo & Juliet in that play.

At any rate, we now have a practice of doing about 70% Shakespeare and 30% other things. The 30% may be a classic playwright like Wilde or Chekhov or Shaw or Austen. By the end of this season, we’ll have done Chekhov twice and Shaw twice if you count our presentation of Pigeon Creek Shakespeare’s The Dark Lady of the Sonnets. We also do devised work as we have done in our adaptation of Bottom’s Dream and Jessica Osnoe’s adaptation of Paradise Lost. Devised theatre is a different way of developing plays that doesn’t really start with a script necessarily. There may be a story or a structure that emerges, but the production emerges from a lot of experimental and laboratory kinds of work. Though these productions are pretty unconventional for a lot of people, there is a movement of this kind of work, and of site-specific work (as Bottom’s Dream and Paradise Lost both were as well). The thinking is that there is so much good storytelling across theatre, film, television, and books, that theatre has to once again concern itself with the way it tells stories, not just the stories themselves.

Add to that our Lit series, which has emerged in the last year or so as a hybrid of Shakespeare and what we call “Makespeare”–improvisation, games, audience interaction–all at a level and in a way that both is and is not conventional Shakespeare.

Add to that our Honey series focusing on women.

So by the time you put a season together that accounts for all these things, the question becomes: who are we?

We present theatre grounded in a love of Shakespeare and other classics. We’re not afraid to be playful and experimental and weird. We’re really into exploring what music does to performances.

So from there, season selection is a multi-step process where I ask a lot of questions of company members about what their ideas are, where I add some ideas, where sometimes we’ll ask the audience what they think, even taking proposals from them about projects. And then we kinda look at all that and see what emerges. Some of it is about the stories we want to tell. Sometimes it is about the opportunities we want to provide our company members to be in certain roles. Sometimes it’s about balancing what we think will draw an audience. We balance all that stuff and see what emerges.

Once there’s a narrower list, we spend a lot of time talking to venues about where to do the productions, logistics of scheduling, that sort of thing. We look at what other theatres are doing and we look at our own lives–do we want to be rehearsing over Christmas break this year? Do we want to brave the sweltering heat of August? Can we even get a space? And then we look at budgets, whether we think we can cast the show, and tons of other stuff.

But the overriding thing is a word you brought up in the question: we’re looking for variety. What Enobarbus calls “infinite variety.” We think theatre is at its best when we’re surprising the audience and subverting its expectations. So one way to think about how we select seasons is that even if we choose a really famous play by the world’s most famous playwright, we’re engaging that choice in the spirit of showing audiences how they can connect to the piece in ways they never imagined.