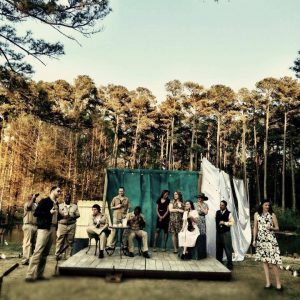 Another entry in an ongoing conversation with artistic director Jeremy Fiebig, this time focusing on the people who make Sweet Tea Shakespeare happen.

Jen: How has the company structure changed over time? Do you find people who meet the company’s needs, or do things change based on who is involved?

Jeremy:  Our first two years, really, we were an a la carte company. I worked with and relied heavily on Staci Graybill, Robyne Parrish, J.R. Hustwit, Michael Carney, Sharon Osborne, and some other great folks to buoy me through the first couple seasons. In “those days” (it really does feel like forever ago), we hired actors and assigned everyone to a setup/strike job because to do a show at the Cape Fear Botanical Garden we needed to load in and out sets, costumes, and props each night. It took an army. I quickly learned I needed a better approach.

I also knew that there were folks in the mix who loved what we were doing, who were passionate about making it all work, and who had skills that extended off stage. So after our 2013 production of Romeo & Juliet, I started inviting some folks into company membership (“Sharers”). At the time, the promise was that they’d have input on how the company took shape, would engage in season selection with me, and would take on production needs as they came up. I know Ruth Nelson, Cheryl Edson, Sean Hanlin, Clayton Riddley, Johnson Taylor, Joey Narvaez, and others were in the mix in those first 2-3 seasons. In 2014, when we added a winter and a spring show and moved to the Poe House, that really became a turning point for us — a realization we needed much more of a company structure than just some folks figuring out how to do plays one at a time. It was at that point that we decided to formalize our company structure into two levels: Sharers and apprentices (I can’t remember if that’s actually what we called the apprentices at the time). The idea was that the Sharers were the core group of permanent members and apprentices were probationary additions.

This sounds sort of arbitrary and weird, and to an extent it is, but I also have to say there’s quite a lot of intention behind it.
It goes like this. Theatres can be and have been built in many different ways over the centuries. The current model everyone understands, whether that be in a professional or Broadway house or a community or educational theatre, is a hierarchical one, where a producer and a director run the show in the way you’d run a Fortune 500 company or a small business or whatever. But this was not the case in theatre for a long, long time before bureaucracy and singular vision for performance were invented, mostly in the 19th century. Before that, companies were run by leading actors, or by multiple shareholders, or by writers, or others.
In Shakespeare’s day, and in the medieval and renaissance periods that constituted the soup in which he and his fellow playmakers swam, the practice was to run a company with a group of sharers. In Shakespeare’s company, there was a business manager, a playwright-actor, an actor who might have handled the leading roles, another who might have helped with props or costumes or who was an able swordsman, and so on. Everyone had other skills they put to use in the production economy.
That model is an approach we take today with our company members, and actually we extend and build on it in a specifically medieval fashion. We now have core members — instead of sharers, they’re now call “Masters” — and members in consideration. Fellows are folks who’ve made it past a probationary period in the company and who are helping us to run the thing. Wrights are introductory members who are helping us by contributing on and offstage in a variety of tasks. We also have Journeyors, who are folks who may have been in the company in the past, but who have things that cause them to need to dial back on the day-to-day commitment.
Our company expands and contracts frequently, and our door is open to folks who demonstrate commitment in any of a number of areas of need, but we also welcome folks who can help us grow in new directions. Right now, we have almost 30 company members who deal with everything from producing to tickets to marketing to costumes and so on. We’re always looking for new prospective members, and have a particular need for scenic artists and craftspeople and technical directors.
One of the great advantages to our structure is that we’re constantly able to bring in fresh perspectives and new energy. The structure also allow us to begin to be “person proof”–meaning that our company is stronger than any one person–and that we actually seek out ways to work in an integrated as opposed to hierarchical way.
This bears out in our work on stage, too, where our Masters and indeed all of our artists become part of the rehearsal room economy, contributing to the overall production.
Connected to all this is the obvious: this is not how most places work. We ask a ton of our company members, believing that their individual investment of time and energy can serve the group and our audiences well. We use folks well — and value both onstage talent with offstage capacity. You have to be able to act, sing, play an instrument, and contribute to one of the many things a working theatre needs to be able to do what it does.