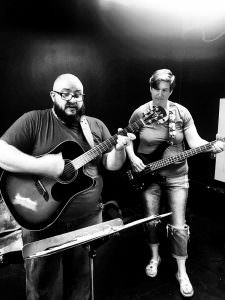 A certain (ahem!) number of years ago, I went on a songwriting bender. At the time I was playing regularly with a folk-rock band, and so all of my writing ideas were coming out in ABAB rhyme schemes with a CDCD bridge stuck somewhere in there. And yet, I was young and hadn’t experienced half the long, strange, wonderful, maddening life I’m living now, so most of my lyrics were either about the potential partners I met or didn’t meet, or some sort of allusion to literature or art that had particularly moved me. Or both.

Fast forward to current days …. Sweet Tea Shakespeare put out a call for original music for its production of Cymbeline. After a few days of hemming and hawing, and a healthy dose of impostor syndrome (dammit, I’m a writer, not a … oh yeah), I typed up the lyrics to four or five pieces from the last twenty years I’ve been writing songs, and sent them on their way.

So now, my song “Gold,” written back in those early days, will be performed during the Cymbeline pre-show. It’s got the right cast of characters—the manipulative queen, the callow youth, the absent young woman in his life–but it also has something more than it did when I first wrote it.

It’s hard to put a name to what that something is, but it’s wrapped up in the fact that the song itself has evolved over time to more than just a Robert Frost reference. As we started playing Gold during the first STS music rehearsal, I realized the song was not the same one we used to play.

The arrangement is different, for one thing. Instead of playing guitar, I’m now on bass (an instrument I didn’t even own, let alone know how to play at the time I wrote the song). And where my friend Lynn used to sing the harmony I wrote down, Cymbeline’s own Queen, Marie Lowe, developed a sparsely beautiful second harmony line to sweeten the chorus just enough to be intriguing and amazing.

When writing a song, you never know if it’s going to appeal to people or not. So many times, what I thought was clever or pretty or a good beat in the privacy of my room turned out to be embarrassingly naïve or parochial or just plain bad when shared with other people. Other times, what I thought was the best way to go with an arrangement was only the second- or third-best way to go, as the other members of the band took the blueprint of the lyrics and chords and added on all the musical architecture the song was missing (and I didn’t even know it).

It’s good for the heart to be able to play with a group of people that you can trust musically, creatively, and artistically to take your humble offering and turn it into something you could never have achieved on your own. That is why I offered this song, that is why I continue to try out for plays and submit proposals to work with Sweet Tea Shakespeare, and that is why I hope I will see you in the audience for Cymbeline as we share the final output of this creative, collaborative process.

Folk rock on, my friends!