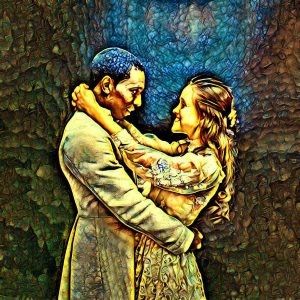 When you find out that the dazzling, multi-talented Ruth Nelson will be playing Desdemona, there are just some things you want to know. Fortunately, Ruth was kind enough to answer some questions about the role and how she’s preparing for it.

What drew you to the role of Desdemona?

Every time I perform a Shakespeare role, I dive into the script already excited, but I’m also always surprised by how much I come to love my character. My initial interest was based primarily on knowing that Desdemona is a “juicy” dramatic role: performing characters who are going through intense situations and to whom intense things happen is a treat for me as an actor, so I was interested in telling Desdemona’s incredibly intense story. Throughout the process, though, I have fallen increasingly in love with each new discovery: her depth of strength, purity of purpose, and openness of heart are staggering. Not only is it a pleasure to bring such a character to life, but it is also an honor.

What do you enjoy most about playing the role?

Again, the intensity of the circumstances makes this such a fun role to play. The story takes us through every extreme of human emotion, from utter bliss to paralyzing fear to fathomless sorrow. That’s quite a roller coaster ride for an actor! Add that to the variety of character relationships: Desdemona’s deep love for and devotion to Othello, her kinship with Emilia, her camaraderie with Cassio, and even her (woefully misplaced) trust in Iago all weave together to provide a rich, nuanced tapestry of scene dynamics. I’m never bored!

Is there any aspect of the role that is difficult?

Once again, I return to the intensity. Dear Desdemona is rather put through the wringer in this story. Sometimes the aforementioned “roller coaster” visits several emotional extremes in just one scene, which requires a great deal of focus and energy. Conveying the TRUTH of each moment—not falling short of the needed intensity, but not wallowing in it either—is a fascinating but tricky tightrope to walk. I LOVE IT.

How is Desdemona like you? How is she different?

I can certainly relate to Desdemona’s innocence, her fierce devotion to those she loves, her deep faith, and her driving desires to do the right thing and to see the good in everyone. However, though I do try to live thusly, I’m afraid I fall rather short of Desdemona’s standard in many ways. She is described by another character as “the divine Desdemona,” and I think this is true: she is almost too good to be human. I suppose that would be another difficult aspect of the role, to return to an earlier question: finding Desdemona’s humanity and portraying her as a richly nuanced PERSON, rather than a paragon, is a tricky mission in which I am determined to succeed.

What would you choose to be Desdemona’s theme song?

“Stand By Your Man.”

Pretty much sums it up.

If you were Desdemona’s best friend, what advice would you give her?

Throughout rehearsals, I have realized increasingly that Desdemona’s decisions stem from the fact that she is a newlywed trying to figure out how to be a wife. Poor Desdemona is so in love, so thrilled to be married, and so determined to be the perfect wife to Othello that she sometimes misses the bigger picture, to the detriment of her own safety. She is so focused on being truthful that the possibility of deception and betrayal in others doesn’t strike her until too late. Hence, I would probably say: “Relax. No one is perfect, including you. You can be innocent, but you also need to learn to be wise. The world is beautiful, but it has some smelly bits, which you ignore to your peril. Wake up and start sniffing.”

Why should people come to see Othello?

This story has it all: love, jealousy, prejudice, betrayal, anger, sorrow, violence, death. Also, it is possibly the most straightforward and tightly constructed Shakespeare play I’ve worked on. There are no subplots; everything revolves around this one central storyline, and the action is fast-paced and non-stop. This is a powerful story, and an important one for our time. I think everyone who attends will see themselves in at least one facet of the mirror this play holds up to society.

How is this production different from others you have done?

The process has suited the dense, frill-free structure of the play: these first few weeks have been solely about text and character and relationships. It has been refreshing to focus on these complexities without having to think about technicalities. Such work serves the story well; furthermore, it will provide us a strong foundation as we start to layer on all those other elements that are necessary to putting on a show, but can be distracting if brought in too early.

What is it like to work with our guest artist, director Dennis Henry?

Working with Dennis has been such a treat! I noticed immediately his depth of knowledge about and care for this story, these characters, and the audience, and so I knew from the start that we were in good hands. Furthermore, Desdemona is the victim of some violence in this story, so he’s had to guide me and my fellow actors through those scenes. I have felt completely safe the entire time. Regarding both the story and actor safety, I am grateful to be working with a director whom I can trust.

What is your dream role?

​I’ve been rather ridiculously fortunate, in that I have already played some of my dream roles, Juliet and Viola being among them. If we’re sticking with Shakespeare, I would say . . . Juliet again. Over and over, until I’m too old. Thinking musical theatre, I would say Cathy in The Last Five Years. Or Belle. ‘Cause . . . I mean, it’s Belle.​ Thinking beyond Shakespeare or musical theatre, I might say . . . Rosencrantz or Guildenstern in Rosencrantz & Guildenstern Are Dead, or Nina in The Seagull. Probably lots more that I can’t think of right now, but you get the general idea. 🙂