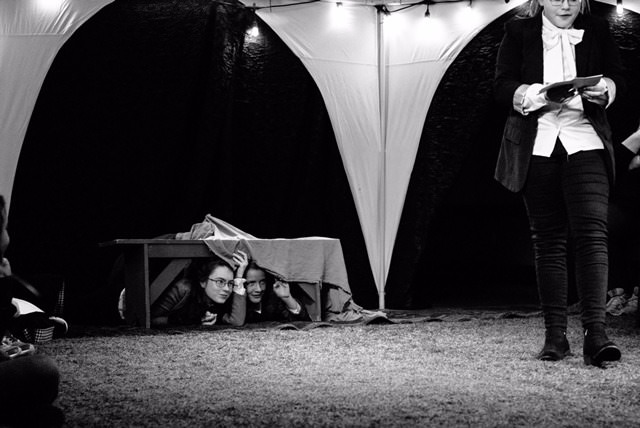 Crash Course on Timon of Athens

Before settling down on a lawn chair or quilt to watch Green Tea’s production,Timon of Athens, here’s a quick overview of the plot.

The play opens with the introduction of Timon- a kind aristocrat in Athens with a severe spending habit. When Timon finds himself confronted with debts, his steward, Flavius, can do little more than tell him that he is bankrupt. Timon then sends his servants to ask his friends for help, only to find that no one will lend him money to repay his debt. In a rage, Timon invites them all to one last feast, severing the main dish- stones and warm water. After this, Timon denounces his former friends and all of mankind.

Meanwhile, Alcibiades, a captain of Athens, has been pleading against a death sentence given to one of his men. For his persistence, the Senate banishes Alcibiades. Despising the Senate for banishing him, Alcibiades decides to turn his army against Athens in revenge and hears about Timon who has left Athens to live as a hermit.

Timon, looking for food in the wilderness, finds a hidden stash of gold. Alcibiades finds Timon and tries to befriend him by offering him money. When Timon hears of Alcibiades’ plan to destroy Athens, Timon gives Alcibiades gold to pay his men and march to Athens. Timon even sends away his former steward, Flavius, although with gold in his pockets and more kindness than he has shown to anyone else.

Alcibiades arrives at the gates of Athens. The senators attempt to defend the city, explaining that not everyone in Athens insulted Alcibiades and Timon, and they ask that Alcibiades come into the city in peace.

To find out how Alcibiades acts once in Athens, come to see Green Tea’s production of Timon of Athens under the stars, August 21-23. Get your tickets to see the play in action at sweetteashakespeare.com/tickets.